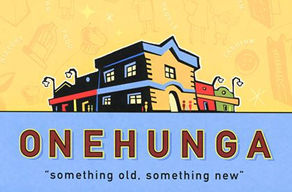 Men from the Royal Engineers were sent to Onehunga with instructions to survey and lay out the first site for the proposed settlement. The area chosen was on the left of the road leading down to Forbes' Inn. The specially designed cottages were then to be erected for the Fencibles. However, before building began, [Governor] Grey was assailed with doubts about the best strategic deployment of this small force and ordered all work to cease at Onehunga while alternative venues were reconsidered.

Consequently when the first contingent of Fencibles under Captain William H. Kenny arrived in Auckland on board the transport "Ramillies" on the 5 August 1847, the promised accommodation was not ready. Over three long and dreary months the unfortunate immigrants were confined first for some weeks on board ship and then, in response to urgent representations by Captain Kenny, they were moved to temporary quarters in the Albert Barracks situated on the ridge above Auckland in the vicinity of Albert Park and the present university.

The companies of the second battalion posted to Onehunga comprised some 80 other ranks, 56 women and 102 children. Their commanding officer, Captain Kenny, was accompanied by his wife and four children. These soldiers had served in various regiments of the British Army in [South Africa], India, Afghanistan, Burma, China, West Indies and Spain. They welcomed the opportunity to eventually own a home and land of their own and also escape the depressed conditions of their homeland. In the course of time a number of them were to take a prominent part in the public life of the village. William Barr 1, John McGhee 1, Adam Nixon 1, Charles Beswick 1, John Bates 1, William Reece 1 and Henry Lavery 1 all served their community well.

The first established industry with permanent buildings was John Bycroft's flour mill and biscuit factory, built in 1854 by the springs in Princes Street. He built a dam so that he could regulate the water flow to drive his waterwheel and provide power to operate the mill machinery. Later he converted to steam power. Before this wheat grown in Onehunga, mainly by the Fencibles, had to be taken by road to the Eden Mill in Mt Eden. This mill was owned by the Reverend Walter Lawry and brought in 1852 by John Bycroft. The Journey there was exhausting and time consuming. To avoid this trip there is an account that Fencible Charles Beswick ground his own flour by carving out a bowl in a large stone near his back door, and with the aid of a pestle, made of tough manuka, ground the wheat into flour.